What’s in my pocket?

Posted by jimofoz on August 31, 2015 with No Comments
in tips&hints, tools

I usually wear an apron when I’m working in my shop. The breast pocket contains a couple of 6″ rulers, a pencil or two, and often a Sharpie marker. There’s a lower pocket in which I usually keep a convertible screwdriver, folding knife, and tape measure. I use stuff from this group almost constantly. The screwdriver especially comes in handy when I’m setting up my tools to loosen and tighten adjusting screws and a knife at hand is always handy.

Posted by jimofoz on August 30, 2015 with No Comments
in general

This is a place to talk about and show some of my hobbies. Mostly woodworking, but other stuff as well. I also have a blog where I’ll be talking about some hints, some rants, and some general stuff.

Posted by jimofoz on August 28, 2015 with No Comments
in general

It’s official, I’m retired. I’m doing woodworking and general mucking about in my workshop full-time now. This is the kind of stuff I like doing.

I’m in the process of trying to get my shop a little more organized. I’ve got stuff from 50 years sitting around waiting for me to use. Now I just have to figure out what to do with it. 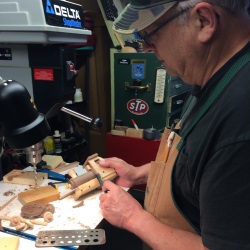